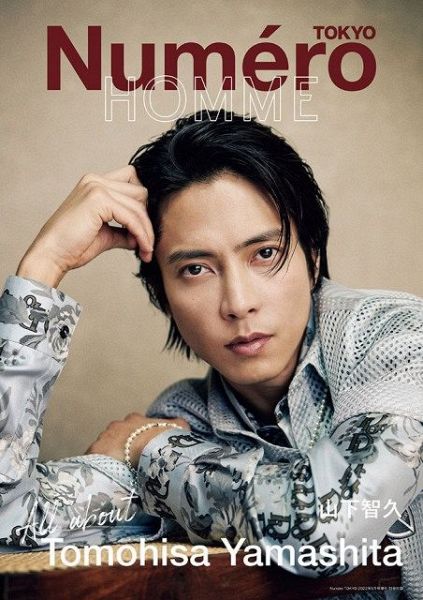 Actor and singer Tomohisa Yamashita, was featured on the cover of the May issue of the fashion magazine, “Numero TOKYO” (Fusosha Publishing Co., Ltd.) which was released on March 28th. Tomohisa was featured on 24 pages in the magazine, with a separate volume appendix.

Since Tomohisa became independent a year and a half ago, Tomohisa will start NHK’s “Honest Real Estate” from this April, as well as Hollywood movies “The Man from Toronto,” and “Drops of God” (scheduled to be distributed on Hulu). Tomohisa continues to play an active role, such as acting as a leading actor for the first time in an NHK serial drama.

Tomohisa looked back and stated that “It had been such a busy year for one and a half years, but I had decided myself, at least two years, I would keep running until I passed out.” Tomohisa continued, “To be honest, I got homesick to live in France on my own for 4 months. I said to myself ‘It’s too LONG! I wanna go back to Japan!’ Tomohisa said bashfully, “I cooked all meals by myself in France. I lived with only one rice maker. I like cooking because my thoughts disappear and I immerse myself in cooking.”

Tomohisa words reflect his gratitude, with love to his fans flowing from his heart as Tomohisa said keenly, “There are very few people I can open my heart to. But my fans are always enthusiastic supporters, great presence and they are giving me unconditional love. I feel my fans are like my parents and family.”

Tomohisa plays the role of Beauty Ambassador of Dior in the magazine and Tomohisa will show off his fantastic appearance surrounded by flowers, created by the world-famous flower artist, Makoto Azuma, in the image of Dior’s fragrance.

Tomohisa said “The flower world which was created by Mr. Toshin is beautiful, dynamic and wild. I am very honored to collaborate with Mr. Toshin this time. I’ve learned that the scent is related to the memories and also the depth of scent through activities as Ambassador.”

Occasionally, Tomohisa’s ambivalent and charming photographs, which reveal the genuine boyishness, are also worth seeing in this magazine.